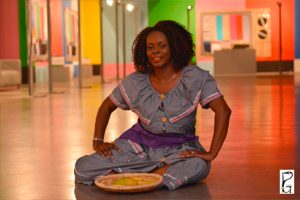 SHERLEY DAVILMAR (ST. FORT) is the artistic director and co-founder of La Troupe Zetwal, a multicultural dance group that performs traditional Haitian dance with live drumming and percussions. She was born in Haiti and immigrated to New York with her family when she was four years of age.  Sherley developed a love of Traditional Haitian dance at the age of 11 but soon learned that many people in her community had turned away from their heritage, mainly in reaction to negative stereotyping of Haiti in the larger mainstream culture.  Determined to re-educate her peers and honor her heritage, she took up the formal study of the dance with Haitian teachers while still in high school.

Co-founded by Sherley Davilmar (St. Fort) in 2001, La Troupe Zetwal has performed in the greater New York area for over fifteen years, enriching community events, theatre audiences, and private functions with the vivacity of Haitian culture.  As an artistic ambassador of an island whose name translates to “mountainous country,” Sherley Davilmar and La Troupe Zetwal aims to share Haitian pride through dance, music, and her special skill of storytelling.

Mrs. Davilmar (St. Fort) has studied and dances under Haitian dance giants such as Pierre Desrameaux.,  a widely acknowledged master of the discipline whose background is steeped in the rich Haitian Traditions. Mikerline Pierre & Mikerline Dance Company, and Lionel St. Surin, all greats who have studied under Vivian Gauthier. Mrs. Davilmar also studies and dances with Julio Jean, a renowned master Haitian dance teacher and choreographer with 20 years of experience, who studied under Lavinia Williams, a company member of Katherine Dunham, at the National School of Arts in Haiti.

As the Artistic Director, Choreographer & Representative of  La Troupe Zetwal, Mrs. Davilmar has volunteered her time teaching Haitian dance in New York City Public schools throughout the five boroughs such schools as Samuel J. Tilden High, Erasmus High School, PS 269 Elementary School (schools with a very large Haitian student population and with little or no funding for extracurricular activities) and cultural organizations such as “La Granchiem”(Haitian organization that promotes Traditional Haitian Culture through dance, poetry and theater) all made possible by Zetwal’s community program called “Reaching For The Stars.”

Mrs Davilmar has facilitated and implemented such projects the “Lakou Nou”(haitian translation: our yard, our community) “How Desensitized Are We”?

(a residency program sponsored in part by the Greater New York Arts Development Fund Of New York City Department Of Cultural Affairs, administered by “Haitian Cultural Exchange” in 2016. Mrs. Davilmar has also facilitated and implemented other projects like: “Brooklyn Bamboche: A Celebration Of Traditional Haitian Dance Contra Danse” (2014)“, “Classic Rara vs Neo-Rara And It’s Lost Elements (2012),  “The African Roots Of Haiti “ (Part II continued in 2011), “The African Roots Of Haiti” Part I (2010), “Let’s Explore The Traditions Of Haiti” (2008), all sponsored by The Department Of Culture Affairs and administered by the “Brooklyn Arts Council”.

Mrs. Davilmar (St.fort) says that “dance is a form of self expression, evoking feelings at the present time that can’t be expressed with words but rather [through] movement. What greater gift can you ask for!”