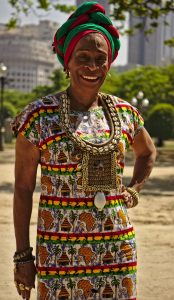 Vanda Ferreira, was born in the city of Niterói, Rio de Janeiro, on November 20, 1947. Pedagogue, post-graduate in History of Africa and Blacks in Brazil by the Cândido Mendes University in Rio de Janeiro.

Both their political and academic formation were centered and influenced by the struggle against racial discrimination, social injustices, the emancipation movement of the African countries, and the Black movement of the United States. She was Cultural Director of the NGO Ipelcy (Institute of Studies and Studies of Language and Culture Yorubá) in the 80s.

In 1988 she was awarded the Xangô Human Rights Trophy by Alerj on the initiative of the then Rio de Janeiro’s State House Representative Marcelo Dias. Professor Vanda Ferreira was the General Coordinator of the Zumbi dos Palmares Project (1986/1987) of the Education Department of the Municipality of Rio de Janeiro.

She coordinated the Projects of the Centennial of Abolition in the State Education Network and in the communities of Favela and Periferia by the SMDS / RJ in 1988, accumulating the position of Adviser of the Municipal Council for the Defense of the Rights of the Blacks (1987/1988).

Professor Vanda Ferreira also directed the Division of Education and Culture of the Criminal System of the State Secretariat of Justice from 1987 to 1991 receiving the visits of the illustrious: Reverend Barney Pittianna – a member of the World Council of Churches and former political prisoner, along with Nelson Mandela; Saint Clair Bourne – ex – black panther, arrested in the period of Malcolm X and Mr. Helém Desir – president of the S.O.S. French Racism and Advisor to President Mitterand.

In 1999, as Deputy Assistant Secretary for Human Rights, she redefined the concept of education for the prison population, enlarged the school network and implemented High School as Human Rights actions.

In 1991 she replaced Senator Abdias do Nascimento as head of the Extraordinary Secretariat for Defense and Promotion of the Afro-Brazilian Populations of the State of Rio de Janeiro. In 2003 she implemented the General Ombudsman’s Office of the Petrobras Social Security Foundation – Petros, where she remained in this position until December 2011.

In 2004, she returned to Morro dos Cabritos, to coordinate the area of social action of the United Vila Rica Samba School. She held the position of Advisor at the Special Secretariat for Policies for Women – SPM-Rio – Rio de Janeiro City Hall from 2013 until June / 2016.

In the second half of 2016, Professor Vanda Ferreira fully dedicated herself to VMF – Consulting and Training, created in 2011 to providing services to public and private institutions in the areas of Social Responsibility, Ombudsman and Human Rights, with an approach to issues of gender and race equity in the world of work.