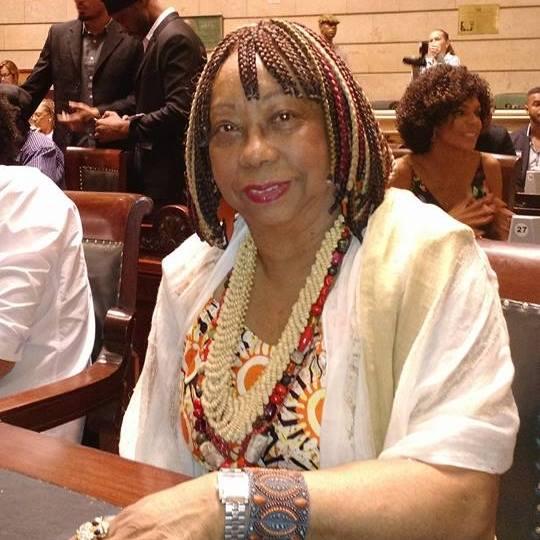 She is an Advisor to the ELAS FUND. She was Coordinator of the Pro-Equity Gender, Race and Ethnicity Committee of the Brazilian Mint until June 2016.
Professor Theodoro worked as an Assistant Professor at the Estácio de Sá University, being Coordinator of the Postgraduate Course in Costume and Carnival at the Veiga de Almeida University (UVA) from 2010 to 2015.
Participated in the Judging Committee of the National Journalist Prize Abdias Nascimento in the three editions 2011, 2012 and 2013, produced by the Union of Professional Journalists of the Municipality of Rio de Janeiro / Cojira-Rio.

Helena was Vice-president of the State Council of the Rights of the Negro – CEDINE, served as Vice President of the ELAS Fund from 2008 to 2015, having been sworn to the O Globo Gold Standard for 27 years.
She coordinated the Afro-Brazilian Studies Center (NEAB) of FAETEC from 2008 to 2013.
Helena Theodoro wrote the books Myth and Spirituality: Black Women (1996);
The Ibéjis and the Carnival (2009);
Afro-Brazilian Culture Notebook (2009);
Iansã, queen of the winds and storms (2010);
Martinho da Vila – Reflexes in the Mirror (in press).

Helena participated as a researcher of the dossier approved by IPHAN which gave birth to the project of recognition and protection of the samba carioca as cultural patrimony of Brazil.