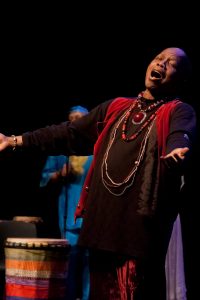 Michael Manswell, Artistic Director, Teaching Artist, Choreographer, Singer began his performance life as a storyteller at Arts Festivals in his native Trinidad & Tobago, winning many prizes and awards. He studied music with Lindy-Anne Bodden-Ritch at St Mary’s College and at Brooklyn College (CUNY) with Tom Cultice. As a singer he has toured Europe, the UK, and the Caribbean and has performed as a soloist in many productions of opera and oratorio including Dido & Aeneas, The Marriage of Figaro, Die Fledermaus, Beethoven’s 9th Symphony, Handel’s Messiah, Missa Criolla and Missa Luba.

He studied dance at the Trinidad Dance Theater with Dr. Eugene Joseph training in Modern, Ballet, Jazz, Ballroom, and Folkloric styles. Michael worked with Geoffrey Holder on “Dougla II” and “La Valse des Bakas” for TDT and toured with the company in the USA and the Caribbean. A prolific choreographer he has created several works currently in the repertoire of Something Positive Inc, the performing company he now directs. Something Positive has recently returned from performing in Morocco and the Ivory Coast and has also performed in Costa Rica, Belize and Trinidad & Tobago.

An avid folklorist and an Orisha devotee in the Yoruba religion, Mr. Manswell presents lectures and workshops in dance, music, and traditional religious practice and works closely with the Caribbean Cultural Center and the Interfaith Center   in their programs. One of “Brooklyn’s Black Men of Distinction 2000” and one of “Brooklyn’s Black Dance Kings (2010)”, Michael is currently an Adjunct Prof (Dance) at Lehman College (CUNY) and teaches for Something Positive Inc., Purelements An Evolution in Dance, the Caribbean Cultural Center, and E.M Techniques.