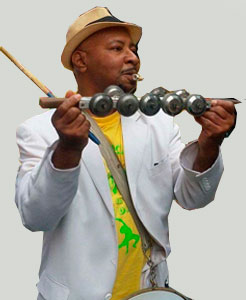 Carlos DeOliveira is the founder and Executive Director of New York Samba School and the Brazilian Council on Samba. Born and raised in Rio de Janeiro, his work as a musician, percussionist,writer, producer and community organizer are manifestations of his lifelong love for Afro-Brazilian culture, particularly Samba and various iterations.

In 2015, Caco performed at the Ford Foundation and for the UN, in commemoration of the launch of Global CUFA (Central Única Das Favelas).

In September of 2017, he produced and organized the project, ESQUENTA DO BR DAY, a pre-Brazil Day event for which he directed an ensemble of over 45 percussionists, and other musicians in a festive procession from Times Square to Little Brazil.

Carlos continues to develop community projects and other educational and artistic programming highlighting Brazilian culture. He is currently producing and organizing the Carnaval do Povo Project , scheduled to take place in June of 2019. This project aims toward bringing together adults and youth Latinos, Caribbeans and all organized communities of African descent to celebrate the Solstice, exchange culture and carnival experiences.